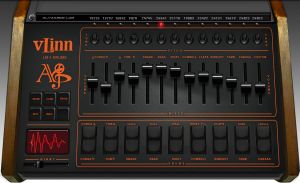 Aly James Lab has released VLinn LM1 Drums, a Linn LM1 VST emulation for Windows. It's Donationware, with a minimum donation of 15.00 €.

VLinn LM1 Drums emulates all the character and internal circuitry of the legendary sample based drum machine - the Linn LM-1 Drum Computer, invented by Roger Linn in the early 80s.

The Linn was the killer drum machine in town back in the early 80s. It has been used to shape the sound of major acts like: Prince, Phil Collins, Thompson Twins, Stevie Wonder, Gary Numan, Depeche Mode, The Human League, Michael Jackson, etc. To this day the unique sound of that machine is highly regarded and only using samples of an LM-1 output cannot reproduce the wide range of sounds this machine can produce and especially the tuning feature and frequency content. The AM6070 DACs and the whole circuitry stands next to the samples characters in that unique sounding team.

The VLinn LM-1 Drum VST provides the closest experience to the real thing because it is not based on samples. Instead it accurately models the clocks and counters that reads the EPROM's memory feeding the AM6070 DACs to decode the EPROM's data in real-time. It models the CEM 3320 filters with tweak-able control over the CV pulses shapes to let more or less transient pass through unfiltered or completely bypass them, special hihat circuitry and VCA providing different hihat sound on each trigger and decay control, separate tuning for all voices with already a wider range without tweaking the electronics... Separate outputs for your DAW, velocity handling, etc. 7+1 voices can be replaced with external EPROM data like on a real machine, opening up a whole new range of sound, still being processed by the circuitry.

VLinn uses a custom C++ core and 3rd party licensed code where nothing fancy was needed.

Runs on Windows 32/64-bit Systems and is multi-core compatible with 32-bit DAW/Host. OS X will be available next year.

About the Linn LM-1 Sequencer:

It was not needed to model the LM-1 sequencer because regardless of all the urban legends about it, it is mainly a 48 PPQN (pulse per quarter note) resolution thing. Modern sequencers and DAWs have a finer resolution usually around 960 PPQN or higher, this simply means that the same beat with some swing will not groove exactly the same at 960 or 48 PPQN. An easy thing to do is to export your beat in MIDI a 48 PPQN and import it back. The full technical explanation is available in the VLINN manual.