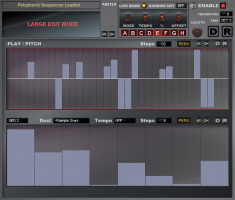 Homegrown Sounds has announced that all Kosmos products including the free Kosmonaut, Kosmos Infekted, Kosmos Classics and Starburst have been updated to v1.5.

The major new feature is the large screen editor which displays the Pitch editor and a second editor, which can be assigned to either Velocity or Seqs 1-5. This provides much finer control without having to use the mouse modifier key and is also less distracting not seeing all sequences at once. As with the standard view, the display will change to reflect the currently selected instance. It is enabled via the 'E' button in the top right master section.

There are also 20 coupons available for Infekted which brings the sale price down to $45. The coupon code is DISINFEKT and can be entered on the shopping cart page to apply the discount.