Magix says that "Daily workflows are optimized via extensive application options. Outstanding characteristics, like 100% sound neutrality, the Hybrid Audio Engine, and the option to work based on objects has been refined and expanded with top features like multi-synchronous cutting (Sequoia), the new 6-band equalizer "EQ116", and many more". 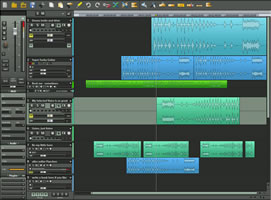 Improvements to the user interface and general workflows
The user screen has been reworked and is now even easier and more intuitive to operate. You can now color your tracks which makes orientation in the arranger and mixer easier. Additionally, Samplitude and Sequoia now have a docking function which lets you "dock" individual elements of the interface (manager, visualization, toolbars, etc.) at certain positions. Complementing these improvements are two new skins "Canis" and "Camo" (pictured).

essentialFX
Low disk space requirements and uniform operation, combined with low resources demands for top quality production, makes the new effect series "essentialFX" a collection of high-quality audio tools for all-around tasks. The essentialFX suite is constantly being expanded. At this time, reverb, a stereo delay, a chorus/flanger, a compressor and an expander are available.

sMax11 & EQ116
sMax11 as a high-end limiter/maximizer and the new 6-channel equalizer EQ116 prove themselves as powerful tools with expertise in DSP effects. The EQ may be set to work with oversampling or phase linear algorithms, while the sMax11 is a type of brickwall limiter with input amplification.

OMF / AAF support (only Sequoia, also optional in Samplitude & Samplitude Pro)
Exporting between various interfaces can cost lots of time and nerves. Starting immediately, Samplitude Pro offers an optional OMF/AAF support, which makes cross-platform data exchange easier. Together with the EDL export for Video Pro X and compatibility to other products from the Samplitude/Sequoia family, Samplitude can be seamlessly integrated into almost every form of digital audio editing, without slowing down the work flow.

Revolver Tracks (Samplitude Pro & Sequoia only)
With the help of the new Revolver tracks, you can switch between various takes or cut versions on one or several tracks – effects, fades and track settings will not be changed. Different solos and parts may be easily switched back and forth in context, or exchanged and tested against each other in their effect in the final mix, without making any other changes in the arrangement.

Vandal (Only Samplitude Pro & Sequoia - "Vandal SE" will be included in Samplitude 11 with the next patch)
The Vandal brings more than just a new concept in design and operation to virtual guitar and bass amplifiers; borrowing from classic guitar lineups, the plug-in signal goes through the stomp box, amplifier, speaker, microphone and maybe echo/reverb effects, whereby every kind of clean, crunch, hi-gain and lead tone is shaped using a unique, universally emulated amp. Individual play patterns and guitars have the same significance as with top-notch tube amps, in contrast to emulations using impulse response.

Multi-synchronous editing (only Sequoia)
Sequoia offers the unique function of the "Multi-sync cut", which combines complete multi-track recordings (for example, of an orchestra), when needed, per take, into a single object and makes switching between takes much easier.

Video engine
The integrated video engine lets you to add video objects to the first track and trim their beginning and end. Various video formats may be used: AVI, DV, MOV, MPEG, MXV, WMV, BMP, JPEG. Video sound track may also be integrated into the project and edited with the usual tools, including support from the source/destination cut commands.

Video export (only Sequoia)
Videos that have been dubbed or mixed with Sequoia may be exported including finished mixes as new files. Formats include MPEG2, DV-AVI, QuickTime MOV, and MXV with different codecs.

Audio Pre- / Post-Recording
With the pre-recording option you can add audio material, which you have played before the start of recording. The pre-recording length is variably set and may be up to 120 seconds. In contrast, "post-recording" also records material which is played up to 2 seconds after recording stop.

Retrospective recording
In principle, this feature functions exactly like audio pre-recording. If you have played a melody via MIDI but forgot to record this element, Samplitude/Sequoia can create a MIDI object using activated retroactive recording, which restores up to 600 seconds of lost material.

Groove quantization
This function expands the standard quantization functions by enabling the extraction of rhythms and phrasing from recordings or loops. These groove templates with the pattern of peaks and transients bring other recordings into swing and can also solve timing problems creatively and appropriately to the arrangement.

MIDI effect velocity dynamics
With "Velocity Dynamics" as realtime effect (MIDI effect) or offline effect, you can edit the attack dynamics of the MIDI notes. You can adjust the represented MIDI velocity of connected music instruments, such as MIDI synthesizers or VSTis, compress/expands dynamic strength of selected events. In addition to diverse, useful presets, the tool also offers a random function, which enables a very variable representation.

All prices are without VAT.

Educational discount: 50% on full versions and upgrades of Sequoia, Samplitude Pro and Samplitude.

The quoted out of context threadby vurt @ 20:07 in Off Topic ClassicsYour favourite tool for quick and dirty measuring loudness?by Kazi7 @ 20:05 in EffectsOrchestral melodic question/answer themeby Ingo Wegener @ 20:02 in Music CafeWaveform freeby Watchful @ 20:00 in Getting Started (AKA What is the best...?)