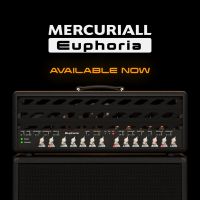 Mercuriall Audio has released Euphoria, a new VST/AU/AAX plugin based on an iconic tube guitar amplifier Bogner Ecstasy 101B, that includes an optional Cameron factory mod.

Ecstasy 101B is one of the most versatile and expensive guitar amps with a wide selection of sounds: from crystal clean Fender, to the edge of breakup VOX, overdriven Marshall, and thick Hi-Gain. Indeed, it's one of the most desirable guitar amplifiers.

Create sounds with no barriers. There are 12 poweramp settings and even more preamp switches at your disposal. It will allow you to create the exact tone you are looking for and integrate it naturally into your style of music. No compromises.

Additionally, we've developed a modern and user-friendly graphical interface for Euphoria, with an intent of making it a platform for future product unification.

Taking into account our thoroughness and attention to the details of modeling, tone and user interface, it took us over a year to develop this product. Euphoria benefits from our own modeling technology Neural Hybrid Engine 1.5, based on neural networks usage. Being the first and only company in the world, who deeply integrates neural networks into real-time modeling of analogue circuitry, we continue improving our unique technology. It is indeed the beginning of a new era in the guitar sound modeling world.