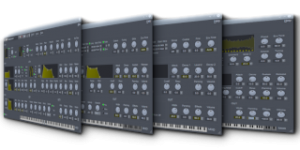 rncbc.org has announced the Late-Summer'20 release of the Vee One Suite version 0.9.17 of old-school software instruments for Linux.

The Vee One Suite comprises four separate, autonomous software instruments, which are named as follows:

All still delivered in dual form:

Changes for this late-season release are as follows: