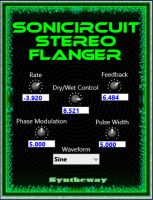 Syntheway has announced the release of Sonicircuit Stereo Flanger, a VST effect plugin for Windows.

Sonicircuit creates a mixing of two identical signals together, one signal delayed by a small and gradually changing period, causing a phase shift between the two signals. The length of this pause is gradually varied over time resulting in a 'sweeping' effect, delivering from subtle nuances to extreme jet engine taking off.