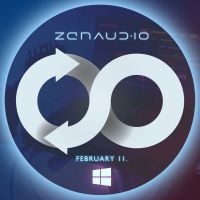 zenAud.io have announced they will release a Windows version of their flagship looping DAW ALK2 next month. Both the full version and their lite version ALK2 Solo will be available to purchase February 11th.

"The long awaited PC version of ALK will excite those looking to live loop on stage without the need for pedals."

"ALK2 was released on the Mac platform last year to much appraise, including a number of awards. For the first time, musicians can control what gets looped, and when -- all within the familiar DAW timeline paradigm. Instead of an error-prone series of pedal presses, ALK2 is empowering the musician to concentrate on their music, and let the software take care of the operational details."

"During a gig, ALK2 follows the arrangement you rehearsed, pressing the necessary virtual pedals to arm channels, trigger effects, record and play loops at the right time -- allowing the musician to focus on the performance, rather than on a pedal. Clips are recorded live and looped to create layers of sound, like a traditional looper, but, like in a sequencer, the loops can be drawn, moved, copied, cut and pasted in a musical arrangement."