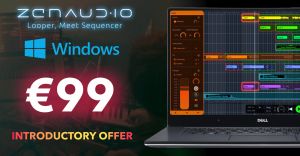 zenAud.io has released the Windows version of their looping software ALK a special introductory price of €99 (MSRP €149) until the 3rd of March.

"We're happy to have reached the next milestone in ALK-history, " says zenAud.io's founder Martin Percossi. "ALK2 for Windows is an exciting chance expand our user-base and allow more musicians to experience ALK's innovative looping workflow."

zenAud.io ALK is a cross between a sequencer and a looper. Like a traditional looper, clips are performed live and subsequently looped to create layers of sound. Like in a sequencer, the loops can be drawn, moved, copied, cut and pasted in a musical arrangement.