Women in the Musical Instruments Industry: An interview with Ingrid Linn

Why aren't there more women creating musical instruments today? After all women are 50% of the population. Despite interesting examples like Laurie Anderson, St. Vincent, and Imogen Heap, playing a contemporary instrument has not been necessarily encouraged, so it follows that there wouldn't be many women designing instruments if they aren't playing them.

And it's not like there aren't examples of successful engineers who who happen to be women. Historically there is Edith Clarke who was the first woman to earn an electrical engineering degree from MIT in 1919 and one of the few women to create music software was composer Laurie Spiegel, who created Music Mouse (Distributed by Opcode) in 1986, but there aren't many examples we can think of these days.

One woman with some perspective is Ingrid Linn, engineer and wife of the successful musical instrument designer, Roger Linn. Ingrid was a part of the development of Roger Linn Designs' AdrenaLinn, and the AdrenaLinn Sync plug-in.

Are you a woman in the music industry? Or do you know a female musician, audio engineer, instrument designer, or software developer? You can share thoughts and stories on you and your fellow female music & audio pros here.

What put you on the path to become an engineer? 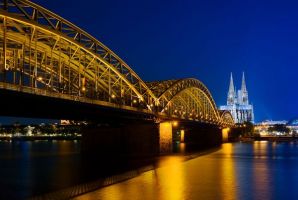 My father was a construction engineer, so I guess I got it a little from him. One of his main interests was building bridges. For me, math was easier because there was always a right answer (Laughs). It was much more work for me to write an essay or something fictional.

How did you happen to study engineering in college?

How big was the class when you started? Were there any other women in your class?

A little over a thousand started the E.E. program that year but only 2% were women.

2%! The music products industry is still about that percentage...

Yes, there are still relatively few women in engineering. But I hope to see more women enter the field because I've found it very rewarding.

How many in the class when you finished?

A little bit over two hundred students, both men and women.

How many of the other women graduated with you?

Actually, most of them made it.

A much higher percentage of women at the end... Did you ever feel any bias?

We had a few old fashioned teachers who would sometimes make a joke, something like; "The women here will be with children soon anyway. I don't know why you even study electrical engineering."

Did your specific interests change once you began your studies?

Yeah, definitely, because I loved playing the cello, but I wasn't sure I could make a living playing music, so I decided to study engineering. After my first two years at university I learned there was an acoustics group in the electrical engineering department that had a very good reputation. I realized that I could actually combine the electrical engineering with my passion for music. So when I started the acoustics classes I really had a good time.

I also really enjoyed my classes in human machine interface, especially the ones about speech recognition. It seemed like science fiction to talk to the computer - but now we are doing this all the time with applications like Siri.

Are there any women engineers that you admired at the time or you admire now, and why?

I was in a mentoring group at the university, they tried to support women and they had chosen women engineers—mostly working for BMW and Siemens—who volunteered to be mentors. They paired me with a very interesting woman named Silvia K. who was traveling around the world and knew a lot about Russia. I admired her as an engineer but also because of her energy and spirit. Even now when I see magazines from the Technical University, I still see that she is very active. She was definitely a great example for me.

How did you make your way from Munich to Berkeley? 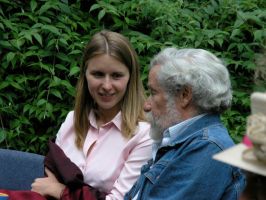 Actually it's a funny story, I worked in a lab in a basement at Berkeley and made friends with Nannick Bonnel, Don Buchla's wife. On my second weekend in California Nannick asked me what my weekend plans were and I told her I was planning on studying some research papers. In her jovial French spirit she insisted on taking me with her to "a night out" in Berkeley. She introduced me to Don and several of her friends, including Roger Linn, my husband - and the rest is history.

Why did you select Berkeley?

It was a contact from my professor, Hugo Fastl. He and Eberhard Zwicker wrote the book Psychoacoustics. It's a very famous book. And they knew the professor here at UC Berkeley. I did my EE master's thesis at UC Berkeley. I was writing a software program in Matlab to simulate acoustic reverberation over 24 channels in an anechoic chamber. It was a very interesting and challenging research task.

You are very familiar with the Max programming language. Did you learn it at CNMAT?

I did my EE master's thesis at UC Berkeley. I was writing a software program in Matlab to simulate acoustic reverberation over 24 channels in an anechoic chamber. It was a very interesting and challenging research task.

I learned to appreciate Max MSP as a tool for fast prototyping and for quickly testing out concepts and ideas. I already learned about Max while I was in the lab. I was around a lot of people who were interested in audio and computer music. I had already met Max Mathews. Knowing there was a language based on his name and being in that circle just inspired me to check it out.

Afterwards, when I worked with Roger on our own products I learned what real engineering is. On the AdrenaLinn guitar pedal we use an Analog Devices chip and the DSP software is written in Assembly – with much less memory available. And of course it has to work in real time while at the university we could pre-calculate everything and process it later. So my understanding of what differentiates research from product engineering grew out of that.

You've had a close relationship with Max for many years; what's the most important thing you thing you have learned from him? 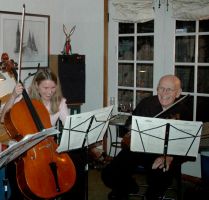 With Cello and Max

To be humble and to be curious. I think he was already over 70 years old when I met him and he had problems with his hearing, so he needed a hearing aide. He came one morning to our breakfast club meeting with a bicycle helmet on and a mic extending out of it that connected to an amp and headphones he was wearing. When somebody was talking he would turn so the microphone was pointing to the person. It was so funny, but for him it was absolutely the thing to do, you know, to try it out and see if it works to check the direction of the microphone and find out how important it'd be. When he tried something out like this it didn't matter to him what other people thought. It was something he wanted to try out, so he did it.

What about the Max's humility part?

He had lived through the Great Depression, and you could just see it in whatever he did. I still remember very well when we went sailing with him and John Chowning. John's boat was located in Sausalito and I had expected we would go in one of the restaurants there, but Marge Mathews had made sandwiches and Max had bought inexpensive rum. So this is what we had for lunch while sitting on John's gorgeous yacht. But we had a wonderful time doing so.

What's the first product that you worked on at Roger Linn Design? 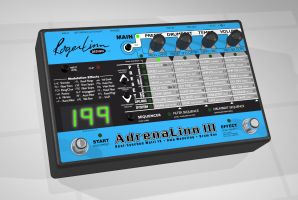 It was the AdrenaLinn III guitar pedal. I worked on the reverb algorithm, the compressor, as well as the tube simulator and our internal editor for the amp modeling parameters.

What else did you do while you were working for Roger?

I set up the new web store and online advertisement. I was interacting with Google and web marketing and stuff like that, because we were just getting started in this direction. I enjoyed learning the business part of the Internet, the marketing and the understanding of how it all works together.

What about the AdrenaLinn Sync plug-in?

We wrote the first version in Max/MSP, but we knew it would eventually have to be coded in C. However, first we wanted to get an understanding of how big the market is and what features should be in it. So we thought it would be a great first start to do it in Max/MSP.

Exactly. I think the most difficult part was actually the copy protection, which I did, which for the Mac version actually took a long time for someone to crack. When we finally came out with a Windows version, I think after 24 hours it was cracked.

What about the new LinnStrument?

I think my biggest contribution to LinnStrument is knowing how hard it is for me to play my cello perfectly in tune. (Laughs) I helped to refine and test the LinnStrument's pitch correction so it always plays in tune without limiting your expressive vibratos and pitch slides.

So, the music business, it's a notoriously sexist, chauvinistic industry. Oops, I probably shouldn't have said that. What's your impression of the music products industry?

It was not hard for me at Roger Linn Design because I was the general manager and co-owner. But working at companies in the audio industry I found it harder for a woman and needed to develop a thicker skin, especially in the early years. I sometimes wondered if it would have been easier in a different industry where women are more accepted. But then again I found it very rewarding to work on audio products that I am really passionate about.

Can you give an example of where you felt like you needed a thicker skin, being involved in the music industry?

I think we all know the "boys club" jokes. But I find the best way to deal with ignorance is to ignore it. (Laughs)

To find out more about Ingrid and Roger Linn visit Roger Linn Design.