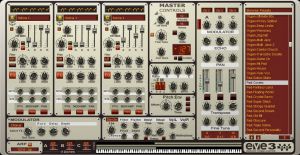 Wusik announced that a new version of Wusik EVE is to be released later this year. Also, they are working on a new plugin host with MIDI processing features called Wusik P2000.

Wusik P2000 runs as a stand-alone application or VST/AU plugin and allows you to do several MIDI tasks such as Key Switching and Crossfading between plugins and many other features.

This project is based on Wusik SQ200 code, making it easier to use the Track's MIDI Processors for those who don't want to bother about the sequencer.

The idea is simple, to have a Plugin in VST/AU format, Windows/OSX, 32/64-bits, that allows you to host other plugins in the same formats (even mixing formats - plus, there will be a Stand-Alone/App/Executable version just like Wusik SQ200). This way you can chain multiple plugins and have each plugin process all input notes (MIDI Information) using the following MIDI Processors (the ones that are already there in Wusik SQ200):

The process of using Wusik P2000 will be easier compared to Wusik SQ200, but you will still need to scan your plugins before using it. Once you have done that, you just add a plugin and select which MIDI Processors you want to use. All that is saved by your Host of choice.

2B Played Music releases 2B Delayed for Windows and macOS