Deskew Technologies has released version 2 of their cross-platform audio host plugin for live performance and session musicians. Gig Performer 2 adds several major new features and numerous enhancements, many of which were driven by feedback from musicians using Gig Performer both on the road and in their studios. 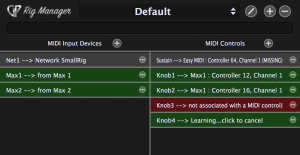 The Rig Manager is a powerful new window between Gig Performer and musicians' hardware worlds. By defining custom aliases for the physical controls on synths or MIDI controllers ("Slider1," "Knob2," or more creative names if desired), the musician no longer has to re-learn that control anytime he or she creates a new Widget. Instead, one can simply associate the Widget with the existing knob. This also empowers the saving and recall of multiple "rigs," with quick and easy hardware mapping that can be a lifesaver if, for example, a rental company provides an unfamiliar keyboard for backline. What's more, in a rig that uses multiple USB keyboards of the same make and model, a lot of tedious re-mapping would usually be called for if the software "sees" the top keyboard as the bottom one or vice-versa. In Gig Performer, entire keyboards (and other MIDI input devices) can have aliases as well, so one can simply touch a keyboard to re-associate it with its correct MIDI-in block.

The built-in multi-track recorder provides a simple way to record all audio input channels in a Gig Performer setup as separate files on the computer. Aimed at front-of-house sound engineers who use Gig Performer for live effects processing, it is ideal for hassle-free audio capture of a performance, which can then be mixed and refined after the fact in the musician's DAW of choice. Individual tracks are stored as WAV files under timestamped folders so you can just record the show every night with the press of a couple of buttons (Record -> OK) and retrieve the performances you want later. 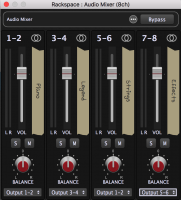 A new Audio Mixer/Router plug-in (eight or sixteen channels in four or eight respectively stereo pairs) offers a plethora of workflow improvements, in particular cleaning up the clutter of needing a separate Gain/Balance block for each VST instrument in use. "Anything-goes" routing of channels to both internal and hardware outputs offers uses ranging from simply mixing several soft synths to patching a single signal to multiple effects chains in a "virtual pedalboard." Of course, solo, mute, and pan per channel are on hand, and the entire device may be controlled from Widgets in the main Rackspace as well as through its own interface. 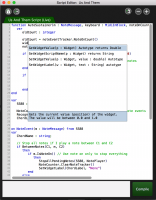 GP Script is a powerful but easy-to-learn proprietary programming language built right in to Gig Performer 2. It empowers MIDI processing and automation tasks limited only by the user's imagination. Transposing the musical key using a semitones Widget is a simple example, but complex "transforms" of MIDI data, event generators (e.g., arpeggios or chord stabs) triggered from a key or pad, MIDI envelopes or LFOs, and functions requiring "if-then-else" logic - say, certain synth parameters changing only if certain notes (think non-linear keyboard tracking) or velocities are played - are just a smattering of what's possible. The script editor supports syntax highlighting, code completion and templates to help you get started.