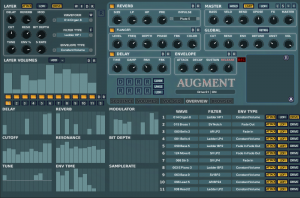 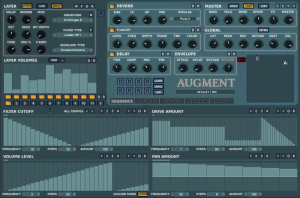 Homegrown Sounds has announced the release of Augment, a new instrument for Kontakt 5, along with a Group Buy and a Kontakt Instruments Sale.

Augment began with the idea that it would be interesting to use sequencers to manipulate additive partials in a rhythmic way, but it soon became apparent that it would be a much more interesting instrument using other waveforms as a huge 11-layer synthesizer. As a result Augment retains the additive mode but also uses 200 waveforms which can be freely selected for each layer. The waveforms are along the lines of PCM synths of the past which have an attack section and a looped constant tone which works well as it allows the sounds to be more focused on synthesis rather than sampling. The attack section can be disabled per layer so they become pure tones.

As far as the sequencing side of Augment goes, the intention was to have sounds which have highly rhythmic components which are locked to tempo. The idea that you have a pad which will come alive with rhythmic complexity when played alongside other rhythmic sounds was at the forefront of the design. The sequence destination are filter, volume, drive and pan. All sequencers are monophonic with the exception of the volume sequencers which are polyphonic.

Augment is available now as part of a Group Buy which adds more products as more people take part. Amongst the possible extra content is an alternative version of Augment, Evolver and Analog Four loops with a Kontakt Interface and a standalone ARP/Sequencer which will make use of Kontakt's MIDI out as well as making its way into a few earlier Instruments. It costs just $14.99 to take part and will run until February.