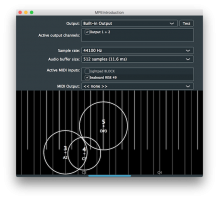 ROLI / The JUCE Team have updated JUCE to v5.2.1 and announced, to celebrate MPE (MIDI Polyphonic Expression) being officially approved by the MIDI Manufacturers Association, the release of a fully updated MPE class.

JUCE's MPE classes allow audio developers to build software that will be compatible with MPE controllers like the Seaboard. You will find the updated implementation on GitHub here.

To get started, check the tutorial Introduction to MPE and learn more about the latest changes in the tutorial MPE zones and zone layouts.

This new milestone lays the foundation for new expressive software and hardware to be built, growing the list of software, synthesisers and instruments that have recently adopted MPE.