Rhythmic Robot, a brand new website selling characterful Kontakt instruments at pocket-friendly prices, has just launched. Their product line-up currently includes sampled recreations of old analog drum machines, some acoustic-style organs and keys, and a variety of hand-rolled synthesisers made from unlikely components (such as 1950s tube signal generators, or banks of vintage Stylophones). Prices are typically £4.95 or £3.95.

More products are promised for the coming weeks, but at the moment the website offers: 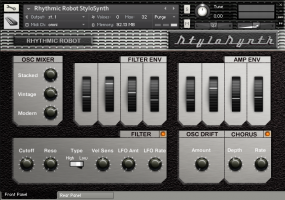 Tubes & Wires (£19.95) is a Kontakt.nki instrument whose three oscillators offer six sampled waves from old signal generators: a 1940s valve (tube) Advance unit, a 1940s valve (tube) Taylor unit and a 1970s transistor-based Goodwill unit. All the signal generators were to some extent faulty, malfunctioning and distorted. This provides a unique and unusual tonal palette from which to begin crafting sounds.

Tubes & Wires builds on these basic waves (sine, square, sawtooth and triangle are all represented) with a full complement of synth controls, forming a complete polysynth with a distinctive old-fashioned sound. 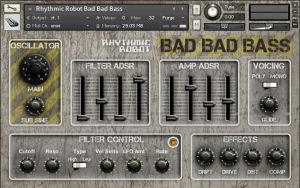 Bad Bad Bass (£3.95) is a dedicated bassline monosynth in Kontakt.nki format. It offers a primary squarewave oscillator and a sub-osc sine wave an octave below, both sampled from a 1940s Taylor valve (tube) laboratory signal generator. The waveforms contain multiple distortions, instabilities and eccentricities that make Bad Bad Bass sound much more complex and warm than a standard sampled instrument. 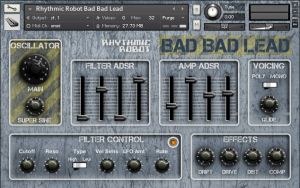 Bad Bad Lead (£3.95) is a dedicated leadline synth offering two oscillators: a sawtooth wave sampled from a 1970s Goodwill transistor signal generator, and a super-sine sinewave oscillator one octave above, which is taken from a 1940s Taylor valve (tube) signal generator. Distortions and instabilities in the sampled waves combine to give Bad Bad Lead a singular character of its own. 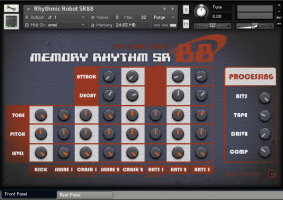 The Memory Rhythm SR88 (£4.95) is a recreation of the 1980s Sound Master Memory Rhythm SR88 drum machine. All the kit pieces through the entire travel of the hardware unit's Tone control have been sampled, which allows the user to dial in precisely the tonal adjustments that would have been possible on the original machine -- but on a per-kit-piece basis, which was certainly NOT possible on the original machine.

Furthermore, three "hidden" sounds that the hardware unit was only able to produce in programming mode have also been sampled, allowing access to longer versions of the snare, hat and crash cymbal sounds. These "new" sounds have been given full attack and decay envelope adjustment, allowing the user to create brushed cymbal effects, long snare drum decay tails, and so on.

MR11 (£4.95) is a faithful recreation of the early 80s Yamaha MR10 analog drum machine. The original machine offered some unique sounds, and also a "Tune" control that altered their tone and pitch. The Tune control has been sampled through its full travel, allowing the user to dial in exactly the sounds they would have created on the original -- but on a per-kit-piece basis, which would have been impossible on the hardware unit.

The kick drum and snare are the stand-out sounds. The effects block includes bit reduction, tube saturation, drive distortion and an output compressor / limiter, and kit pieces can be panned, adjusted in level, and Tuned individually. 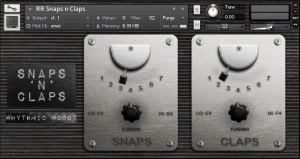 Snaps n Claps (£1.50) is a simple handclap and finger snap generator, allowing you to choose from high- or low-pitched claps and snaps, and to choose how many simultaneous claps or snaps are generated. A fine-tuning control allows you to position the sounds in the mix with accuracy.
Subtle stereo spread is introduced as more snaps or claps are selected, imitating stereo miking of a group of people. Simple but effective.