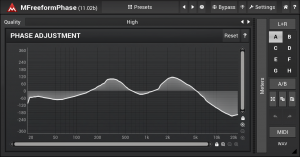 MeldaProduction has updated all effect plugins and MPowerSynth to 11.02, and MDrummer to 7.00, providing several new features, optimizations, improvements and fixes.

Additionally 3 new plugins have been released:

MFreeformPhase, a powerful utility that lets you adjust the phase of individual frequencies however you like. It is free as a part of the MFreeFXBundle bundle.